Lately I have been obsessed with trying new recipes.  Especially in the crock pot.  I've bought a few new cookbooks, but the real gem has been finding this site:

A Year of Slow Cooking: Alphabetical Listing of Recipes

She's got amazing recipes for the crock pot.  They are gluten free as well, which isn't an issue at our house, but is nice to know.  They AREN'T light tho, so I've done SOME lightening up.

Not Monday....on Monday I channeled my inner Julia Child and made this: 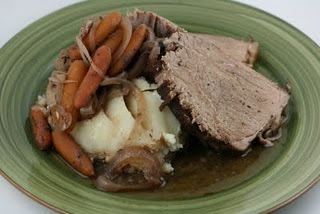 
It turned out AHHHHMAZING.  The only thing I did differently is took the au jus out and made a roux based gravy.  It was rich and yummy and took it to the next level.

I can cook "gourmet" in no time flat with my slow cooker.  We have cut our "going out to eat" budget by quite a bit because we have plans for the house and plans for vacation and cutting spending is helping the savings account....this gives me the same "going out to eat" experience at home.

Last night I tried this one:
http://crockpot365.blogspot.com/2008/08/crockpot-brown-sugar-chicken-recipe.html

It's brown sugar chicken.  It was ok.  My husband loved it.  He thought it turned out really good.  To me it was decent....but nothing to write home about.  I probably won't make it again.  The chicken was moist, but the flavor was just ok.  Maybe with a jalapeno pepper or red pepper flakes it would have had depth, but overall I wasn't wowed.

Then I made  Snickerdoodles from Smitten Kitchen.  Alas, I don't have a photo (they are on my camera and my camera isn't here right now).  There were really good.  They were MUCH MUCH MUCH better after they had cooled for an hour or so and settled up.  I thought they could use a tad more sweetness and a little more tang, so next time I'm going to use lemon zest and maybe a lil brown sugar, but overall they were pretty darn good.  AND today they are still soft and chewy and yummy.

Tonight I think I'm going to take the au jus and the left over meat from Monday and add in some carrots and potatoes and other veggies and make a beef and veggie soup.  I may add some orzo and tomatoes too to take it up to the next level.

Somebody save me.  Winter weather (not that it's been cold here, but it's cool) plus the shorter days makes me want to stay indoors and cook and bake and nest.  And hibernate.  But with a toddler one doesn't sleep....so instead I cook!!